Why did Lord Swaminarayan establish an Acharya tradition? 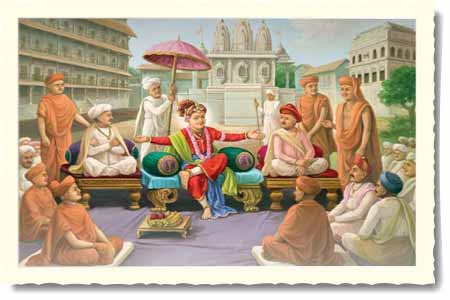 While managing the ever-increasing number of temples, one has to deal with property, both movable as well as immovable, appointments, dismissals etc. Shree Hari wanted to keep His saints free from worldly affairs so that they can devote all their time to religious and spiritual practices and teaching and propagating the same. This was unique arrangement to keep the saints free from the temptation of worldly affairs.

The Acharyaship is not only on the ancestral basis, but it is on hereditary merit based. Acharya should be from Dharmadev’s descendants. But he should be fit for the Acharyaship in every aspect. He must be learned,pious, virtuous, moral,ardent,single minded devotee of Lord and well aware of management and his responsibilities.  If an Acharya has more than one son, or no sons, then the one who is fit for being an Acharya should be made an Achrya, no one has the right to be Acharya on ancestral basis alone.

The highly adorable planning has kept away the followers from hero-worship of the Acharya as is done elsewhere and has kept the followers firmly dedicated to Bhagwan Shree Swaminarayan.

Shree Hari commanded that the Acharyas were to be the final arbitrators of all rules about restrictions and observances and the final authority in all religious disputes.

The Acharya alone can initiate a person as a follower by a simple ceremony. Only those saints initiated by the Acharya are the real saints of Swaminarayan Sampraday. (Shikshapatri Slok No. 128)

Constitutionally the Sampraday has made sufficient arrangement for the comfortable living of Acharya.

The first two Acharyas for the Sampraday were chosen from the holy relatives of Shree Hari, with the unanimous consent of all the followers. (Shikshapatri Slok No. 3) Family traditions being the most important for the management of religious, spiritual and worldly affairs, the rule of succession is strictly followed. The Acharyas, though householders have to lead a highly disciplined self-controlled life to maintain the prestige of their supreme position. They have to be great scholars with excellent manners, methods and etiquette.

The Acharyas install the Murtis (idols) in the temples and only such Murtis are divined to fulfill the desires of the followers. Same is the case of the Murtis presented by the Acharya at the time of the initiation, of a new follower.

The Acharyas through tradition have taken keen interest in the construction of temples and their renovation, and many other activities associated with the welfare of the public in general and the followers in particular.

Let us see some of the reasons why Lord Swaminarayan established the Acharya Tradition from His own divine family:

To maintain singular constitution over the entire Sect:

Lord Swaminarayan was very strict when it came to following the discipline of the Sect, and to ensure that, the strictness was maintained, it was necessary to have a constitution.

This constitution would make sure that each and every member of the Sect was responsible and answerable to someone of important stature, which would help one run the administration and maintain the dignity of the Sect smoothly.

There were many divine and reputed saints, endowed with saintly qualities, who could have easily become the Acharya of the Swaminarayan Sect.

Lord Swaminarayan also had appointed Vasudevanand Brahmachari  as the new Acharya, but the saints were too detached to take up such a role, and therefore he gave up the role of being an Acharya!

So after talking to all the foremost representatives of the Sect, they came to a unanimous decision, that the Acharya should be someone from the divine family of Lord Swaminarayan, who were chosen based on merit.

What if there was a Saint as the Acharya?

The outcome of such an arrangement would be “n” number of Acharya thrones, where “n” would be the number of saints who want to become the Acharya of the Sect.

Even after such a solid arrangement by Lord Swaminarayan, where each and every rule is written, there are so many disputes and so many outgrowths from the original sect, the situation would have been chaotic if there were saints as the Acharya.

Addressing the actual situation and reality :

But one needs to have a practical approach towards this situation, as this kind of corruption is not new, it has happened in almost each and every Sect and organization. That is the nature of humans, they spoil everything they touch for their selfish needs. I do not justify the corruption in anyway, but I think the approach should be to eradicate the corruption and not the tradition itself.

Just because the President of a country is corrupt, that does not mean we throw away the concept of Presidency and make a new country for ourselves with our own constitution. Then India would break into so many countries, each state will ask to have a new constitution for itself. Is it the solution, no, it will create more problems.

So to conclude, the inception of Achrya tradition was done with a very pure intention, and it is our duty to keep it pure and free from corruption, and not superseding the vision of Lord Swaminarayan.